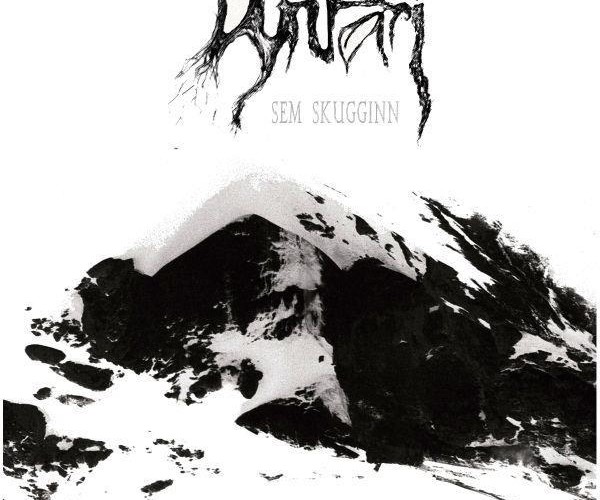 Dynfari is a quite young band, not only in meaning of experience on the Icelandic music scene, but also literally. The band was created in 2010 on the initiative of Jóhann Örn (vocals, bass, guitar, other instruments) and Jón Emil (drums, guitar).

The band has two albums in discography. Its debut album „Dynfari” was out in 2011 and the second album entitled „Sem Skugginn” (eng. „As the Shadow”) was released last year by record label Code666 Records.

In a nutshell, music of Dynfari can be described as an atmospheric post-black metal and I can recommend it with clear conscience to enthusiasts of Myrk, Wolves in the Throne Room and Austere. Moreover, depressive doom tones, which appears often in music of Dynfari, mention such bands like Drudkh or Alcest. In contrast, a severity of the sound, which sometimes gets a word in edgeways, connotes with Burzum and Darkthrone.

„Sem Skugginn” means „As the Shadow„. Black and white photo adorning the album cover shows a mountain peak covered with snow. An unfriendly and isolated place. Kind of minimalistic but at the same time it leaves a lot of free space for further numerous interpretations.

On „Sem Skugginn” Dynfari takes us for a long musical journey to the infinite horizon of winter Icelandic landscapes. The album is inspired by barren but very beautiful white sceneries, which reveal a real and ruthless power and strength of nature Icelandic winter. A depressing cold, gloomy darkness, harsh climate. A sense of isolation and loneliness. A wonderful and supporting atmosphere, which lets demons to get out of human imagination.

It’s worth to mention that second album of those Icelanders shows a lot of progress and development of musicians, as well as in terms of their technical background as in composing skills.

„Sem Skugginn” contains nine tracks and includes a remarkable portion of 70 minutes of music. Although the songs are often mostly composed of instrumental parts, Dynfari proves perpetually there is no place for unnecessary words in their music. The band builds up the atmosphere of despair and desolation successfully. All these emotions are included in the music. Dynfari is characterized by a great creativity. Long and climatic compositions are enriched by progressive digressions and ambient backgrounds and also by samples from movies. Moreover, hidden melodic reflections of light are hidden in between their dark musical verses. Thanks to this, Dynfari keeps the listener’s attention for the entire 70 minutes.

In the opening album track titled „Glötun” (eng. „Destruction„) the band used a dialogue taken from the movie „1984„, an adaptation of George Orwell‚s book. The conversation, which takes place against a background of blurred spots keys tones, introduces a slowly escalating anxiety and tension. After a while, the drums begin to roll slowly and heavily. Slightly soiled and sizzling sounds of guitars hover in the air for a long time hovering and gives another colours to a thick and gloomy mood. A fog gets thicker, lies down on rocks and slowly moves on the ground. The weather becomes more and more dark. However, there is any dramatic climax reached. The track moves ahead and builds up the atmosphere, paints bleak pictures and crushes with sad sound. Anyway, it ends up with nice acoustic sounds. The cold wind disperses the fog. The moon appears in the sky.

The second track lasts more than 15 minutes and is titled „Hjartmyrkvi” (eng. „Eclipse of the heart„). It begins with a slow pace and delicate organ sounds. The music makes us feel abandoned. Alone in the icy wilderness. After a moment an explosion takes place. A sudden acceleration and strong black metal hitting of drums and guitars explode with rain of falling stars. This is one of the most dark and emotionally aggressive moments on the album. After a few minutes the „noise” drowns suddenly in the sea of the night calmness. A beautiful melodic guitar part appears. Musicians prove they are fluent in language of dynamic and evolving black metal. A few times more we experience changes of dynamic and intensity of the sounds. By the way we are surprised several times. Dynfari grades the tension and leads into a trance and moves also towards monumental musical forms in very smooth way. The song is ended with heart beat sounds.

After the „eclipse” the sky is enveloped in black. „Svartir himnar” (eng. „Black heavens„) is quite eclectic song. There are samples taken from movie „White Oleander„. We start feeling the hypnotizing Dynfari charm more clearly from now on, it drowns us more and more deep into the abyss of infinite blackness. A death, sense of loss and an accompanying pain.

We wander the corridors of our deranged mind in the darkness of night and frantically look for the exit of this so hopeless, empty and full of despair world. „Myrkrasalir” (eng. „Dark halls”) brings dark sounds of guitars and heavy drum beats by Jón and desperate but used moderately and carefully growl of Jóhann. It’s good old Norwegian school of classic and atmospheric black metal. Moreover, decelerations or doom tempo steps in some places into more progressive paths, where musicians reveal other musical dimensions to us.

„Augnablik” (eng. „Moment„) offers a brutal tune. Cruel and razor-sharp sounds of the guitars and agonised and aggressive vocals paralyse us. There appear hallucinations and delusions. We experience a mental confusion. A trance and atmospheric walk in the middle of the song intensifies those experiences. The band once again leads us through the meanders of post black metal.

After the „moment” a „shadow” covers us. It’s time for two parts of „Sem Skugginn” (eng. „As the Shadow„). An athmospheric and triumphant epic proves a composing talent of Dynfari. A hypnotic rhythm. A pall of gloom. Depressive sounds are woven into cold post-black metal riffs. Long musical ideas with many different contrasts. There is definitely a place for a melody also. We don’t believe own senses when shy sounds of flute reach our ears. That’s all crosses a border of typical black metal’s perception. „Skugginn Sem” part I and II are ambiguous. The song follows music direction of progressiveness. Despite of many changes in this song there is melancholy and despair and other connected feelings accompany them too. There’s hidden beauty in this.

The album is closed by a song contrary titled „Eilifð” (eng. „Eternity„). This „infinity” is a specific stylistic device. It is an attempt to get emotionally quiet, calm. We can see the image which moves away further and further from our eyes til it becomes a tiny black dot on the horizon. All of sounds leave us too. Then thoughts and feelings fade. The space resounds with silence. The state of nirvana or unconsciousness or… death. 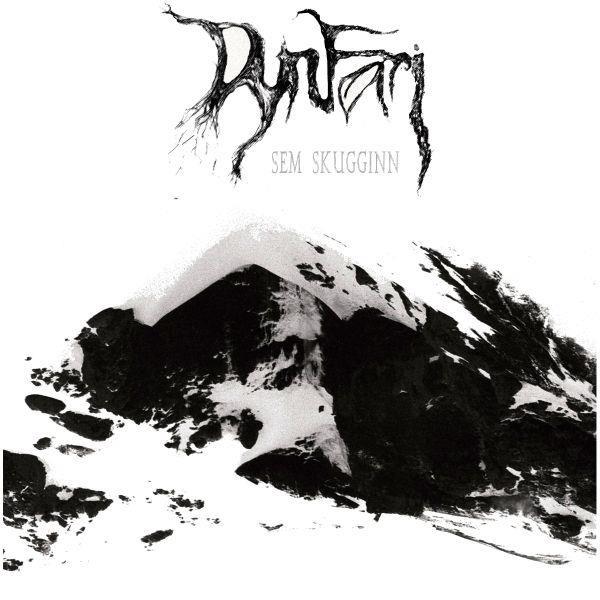