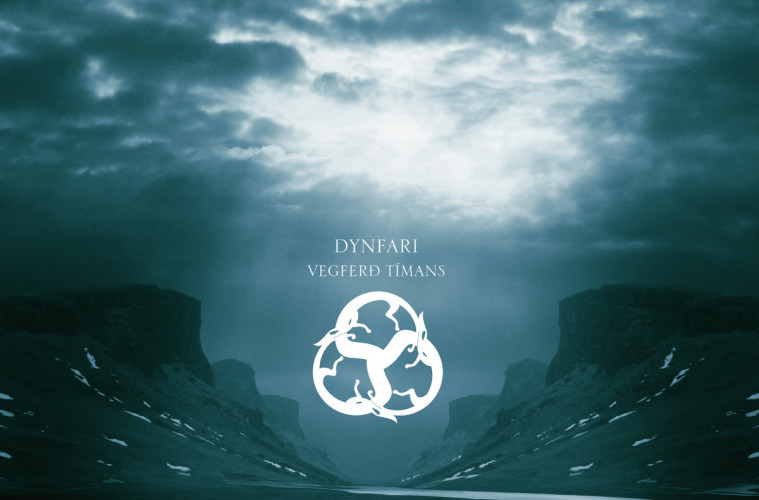 The album „Vegferð Tímans” is the third unveiling of the melancholic post-black metal band Dynfari’s musical face together with other sounds which it is difficult to be indifferent to.

The group is made up of four musicians; Jóhann Örn (vocals, guitar) and Jón Emil (drums) have since recently been supported by Hjálmar (bass) and Bragi (guitar).

Haukur Hannes was responsible for the mixing and mastering of the new album. And the brilliant cover was designed by Metastazis (he had previously prepared graphic designs for Alcest, Behemoth, Watain and Morbid Angel among others). This image is simply pure art. Check it out for yourself. I can stare at it endlessly.

The material on „Vegferð Tímans” was prepared over quite a long time. Work on the record had been continued from 2012 onwards, so some songs were composed at the same time as the previous album. And the first recordings were made at the beginning of 2013. This process included re-recording the performances, as well as careful preparation of the structure of the whole album. But it was worth the wait.

In the atmospheric/post-black metal genre, you can notice a lot of interesting musical phenomena, like Alcest, Burzum, Drudkh, Austere, Woods of Desolation, Nyktalgia, Wolves in the Throne Room or Deafheaven. Nevertheless, even in this ‘black field’, already heavily exploited as it might seem, Dynfari offers us something truly fresh and surprising. Their album „Vegferð Tímans” is the quintessence of the fusion of black metal, Icelandic sensitivity and unlimited artistic imagination. That is why the music created this way is so hypnotic – paralysing the listeners with its icy beauty, attracting them with the mystery of gloom and the magnetism of darkness. Some have even designs on describing the music of the Icelanders as ‘Drudkh meets Sigur Rós’. Dynfari unquestionably sound unique and their music speaks for itself without the need to resort to the aforementioned examples.

The skillfully balanced production of Vegferð Tímans made it possible to create an ideal balance and the right proportion of what is pure to what is raw and organic. Thanks to this, while the sound of the music retains the sharpness and bluntness of black metal, the compositions are characterised by many more colours than just shades of black. In the new compositions of the Icelanders, apart from the well-known metal elements, clear baritone vocals, soft acoustic guitar parts, string parts or female vocals appear, among other things. The band does not shun experiments. For them, black metal is just a starting point, a foundation on which they have built a bigger, unique framework. At the same time, they have used elements from different musical backgrounds. At this point, it’s worth mentioning that ‚dynfari‚ is an archaic Icelandic word to describe a ‚wind’ or ‚storm’. And in a free translation we get something like ‘that which goes with a thunderous sound’. A coincidence?

Dynfari’s latest release consists of material that is definitely more polished than the previous albums which have been so successful, and its construction reveals the musicians’ much greater maturity and artistic awareness. Bravo! Dynfari is definitely one of the best contemporary atmospheric black metal bands.

With their latest album, „Vegferð Tímans” (ang. Journey of Time), the Icelandic metal musicians take us on a nearly hour-long journey. It is not so much travelling through the barren wastes of Iceland, it is more a journey in time and space. It has a spiritual and philosophical dimension. The lyrics written for the record (in the Icelandic language) also have a nature like this. They touch on the subject of human life, death and beyond. They portray humans as beings who are connected to the universe. They try to raise questions and explain the issues of where our place in the universe is and where we are going to. It is well-known that Iceland is conducive to a sense of oneness with nature.

The lyrics are undoubtedly characterised by a powerful appeal, but the music seems to be even more expressive. „Vegferð Tímans” is a wonderful and very immersive experience. The music has a spiritual aura that introduces us to a state of some astral intoxication. It is a material that carries you into another dimension, a different state of consciousness. While you are listening to it, you lose control of your senses and allow the music to simply carry you away. The whole time, you get the impression that you are touching something intangible and staying at a metaphysical level.

The melancholy of the human soul speaks through the sound and atmosphere of „Vegferð Tímans„. This is some form of catharsis. It has been a long time since black metal was so intimate. And, in the case of a band from Iceland, this intimacy takes on a new dimension and ensures deep experiences. However, I can assure everyone that there is no lack of the expected black metal brutality and rawness.

If we perceive this album as a concept of human time travel – from birth to inevitable death (and beyond) – and look carefully at the lyrics and music, we can divide it into two parts. The first part consists of the compositions from 1 to 4 that, in our interpretation, could constitute the scoring of birth and life. It is a way out to light (Ljósið – The Light), passing through the chaos of life (Óreiða – Chaos), experiencing its finiteness and fleetness (Sandkorn (Í Stundaglasi Tímans) – A Grain Of Sand (In The Hourglass Of Time)), as well as an attempt to experience it fully, to appreciate the beauty of life as our only consolation in anticipation of death (Hafsjór – Vast Ocean). I will mention in passing that some samples from the film „American Beauty” are interspersed throughout composition 4; according to the musicians, they refer to the lyrical themes of the album in a clear manner, and in English at that.

The journey reaches its climax with the tracks from 6 to 8. They depict the journey of the soul freed from the body; coming from the Earth (Vegferð I – Ab Terra, Voyage I – Ab Terra), in the direction of the stars (Vegferð II – Ad Astra, Voyage II – Ad Astra), to the darkness (Vegferð III – Myrkrið, Voyage III – The Dark). The trilogy is braced by one text divided into three parts, whose lines sometimes intersect in particular songs. The subject of the text is connected with the previous lyrics and is a complement to them. It raises the aforementioned issues; that is, unity with the universe. That is why you can see the triskele symbol denoting a repeating cycle and infinity on the cover.

The album „Vegferð Tímans” should be listened to from beginning to end, because in this way it forms a single whole and takes on a broader meaning. Only then will we see the essence of ‘time travel’ – mankind’s heading from the light to the dark.

Black metal as performed by Dynfari is fantastically complex and ambiguous. This is clearly an expression of extraordinary ideas and the genius of the musicians, who cleverly play with the listeners’ perceptions and effectively excite their imaginations. The band don’t shun the roots of black metal, but they also make you feel that their musical fascinations are much broader. Therefore, the sinister guitars and drum parts, as well as the furious growl, have been framed with phenomenal contrasts that captivate the listeners with transcendental and mysterious space, the cosmos of emotions and the depths of melancholy. Dynfari have created a perfect balance between light and darkness. At the same time, their music doesn’t lose anything of its devilishness and the power of the gloom, while gaining the charm and beauty of the glow of the green aurora sliding along the ridge of the glacier.

Dynfari restore your faith in ambitious black metal with the album Vegferð Tímans. It is a great and magical work.