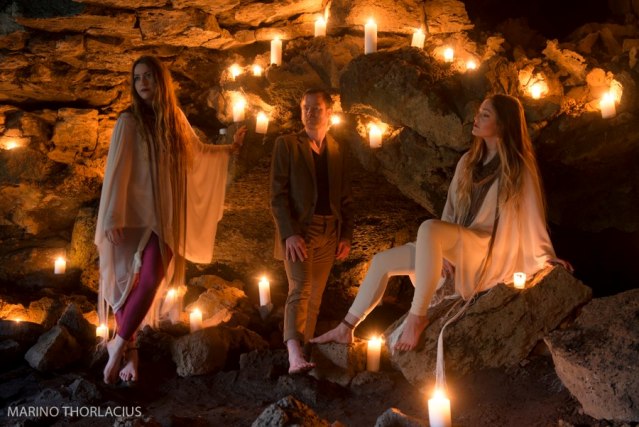 Ylja is one of the most interesting of Icelandic bands playing acoustic folk. Their music has an amazing sound which consists mainly of a beautifully interwoven vocal harmonies and unique lap-style slide playing the guitar.

Recently we have introduced our review of the debut album of the band “Ylja”.

See what the band have to say about their music in our interview below.

Marcin: Do you remember the first time when there was music in your life? What was the music?

Gígja: There has always been music in my life as long as I remember. My family, exspecially from my mother´s side are very musical and both sang a lot, and listened to all kind of music. What´s in the top of my head are Tracy Chapman, Cat Stevens and the music from the musical Hair.

Smári Tarfur: I started listening’ to my dad’s old vinyl records when I was 5 or 6 years old. Rolling Stones, Otis Redding and stuff like that. However, It was an old AC/DC record that got me hooked on music for life.

Marcin: So how did it happen that you met and decided to make your own music together?

Gígja: Me and Bjartey actually met in a choir at our High School. We decided to perform together at our school´s annual singing competition and from there on we couldn´t stop. We developed a strong friendship through the music and used our common passion for singing and harmonizing to create something new together. We spent so many hours together in either one of our rooms, on the bed writing songs and practicing the guitar when most of our same age friends were doing something entirely different.

Smári Tarfur: I had been following them as a duet since the beginning and was thrilled and honoured to be asked to join the band in the Fall of 2011. Gígja and Bjartey have inspired me to become a better guitarist and musician. And they taught me how to shave too!!!!

Marcin: Do you have any musical education or experience? Have you been playing in other bands?

Gígja: When I was 15 I started learning the piano for two semesters. Then when I was 17, about the time I first met Bjartey I decided that I wanted to play the guitar, bought myself a cheap one and went on Youtube, “how to play the guitar”. – No, I´ve never been in any other bands.

Smári Tarfur: I’ve never learned how to play the guitar but when I was 8, I took drum lessons for a few years in my old hometown, Patreksfjörður, which is in fact where Gígja is from too.

Marcin: I heard that “Ylja stands out as one of the most fresh band to come out of Iceland”. What do you think about it? Do you have any plans for it?

Gígja: That of course is something we are glad to hear. We have been working hard and, always trying to expand and broaden our sense for creativity.
This spring we had two new members in the band and together, the five of us are creating new music for our next album.

Smári Tarfur: It is always a pleasure to hear something as wonderful as that. It’s goin’ to be super exciting to see what happens on the new album. I’ve been a huge fan of our percussionist/drummer, Maggi, since I saw him playing years and years ago, so to have him aboard along with Valgarð, the bassist, is truly a blessing for the band.

Marcin: What has changed in your life since the release of the album?

Gígja: More and more people have heard about us and heard our music. So in that context we have been busier around the music.

Marcin: Who would you recommend your album?

Gígja: I think our album is the kind that is for all age, from kids in pre school to our grand parents.

Marcin: Could you tell more about how does the process of creating music on your album look like?

Gígja: Most of the songs were written when there were just the two of us, me and Bjartey. Smári joined us in the fall of 2011. We decided after some time in the studio that it would be better for us three to record the album mostly “life”. We felt like something was missing when we recorded separately. We added the bass, which our friend Hlynur from the band 1860 played on and some percussion in later.

Marcin: What is so special in your music? What does make your music different from the rest?

Gígja: Smári, you have to answer this one! 🙂

Smári Tarfur: Since the girls have a unique approach of both playing the guitar and doing interesting harmonies on vocals, I guess that along with a dreamy slide guitar makes for a certain type of energy which people don’t hear often. But then, it’s hard for us to put it into words and we prefer that people find out themselves. And by all means, let us know – we really would love to find out what’s happening! 🙂

Marcin: What inspires you?

Gígja: The Icelandic nature, the sea. people and various experiences.

Smári Tarfur: The force within is my main inspiration. Once you get the chance to connect to it, you will be lead in directions that you could never think of yourself. I try to stay open and sensitive to that and once it shows up, jump in the river and let it bring me to a new place of creativity.

Marcin: Why do you sing in Icelandic and not in English for example?

Gígja: We have both been writing songs in Icelandic and English but only the Icelandic songs made it to the album. In the end we only had one song in English that we really wanted on the album. At that time we either just wanted the whole album in English or in Icelandic, so we decided to translate that one song over to English. The meaning of the song didn´t change at all, so we were happy with the result.

Marcin: I suppose that most people outside of Iceland doesn’t know what you sing. Please tell about the subjects of your lyrics.

Gígja: One of our song is called Óður til móður, which translates to An ode to a mother, is a song that we dedicated to our moms and the lyrics are in a kind of an old-ish, poetic Icelandic.
Sævindur Hafsson is a song about a fisherman that has an a dramatic experience…we let the listener to decide his destiny for themselves…
Á Rauðum sandi is a song that is basically about the Icelandic summer, the nature and experiences that most Icelanders can relate to very well.

Marcin: Is your music and lyrics inspired by Iceland in any way?

Gígja: Some of the songs are inspired by the old Icelandic folk songs, and of course beautiful nature we have all around us.

Marcin: What do you think about Icelandic music scene?

Gígja: It´s very active and also very diverse. You can find people in almost every corner that are involved in music in some way. I love that. So many talented and creative artists doing their own things in music.

Marcin: In your opinion what is the most characteristic thing about the music from Iceland?

Gígja: I´m personally a sucker for the Icelandic language and the acoustic, indie scene attracts me the most. But then again, there is so much variety, you can always find something you like in all types of music genres.

Smári Tarfur: I love the character that Iceland seems to bring out in the artists over here. And there are so many different scenes to explore. Everything from acoustic folk, to a lively pop scene and not to forget the incredible metal scene which keeps developing further every minute. It’s a joy to be surrounded by so much creative energy on this small, cold island of ours.

Marcin: What icelandic bands you recommend?

Gígja: Right now I would say Moses Hightower, 1860 and Hjaltalín.

Smári Tarfur: Blóðberg is a current favourite for me. Una Stef gets my juices flowing, every time I see her live. 1860 is also a band I just can’t get enough of. Their vocalist must’ve been chosen by the almighty to make us all feel wonderful. What a voice!