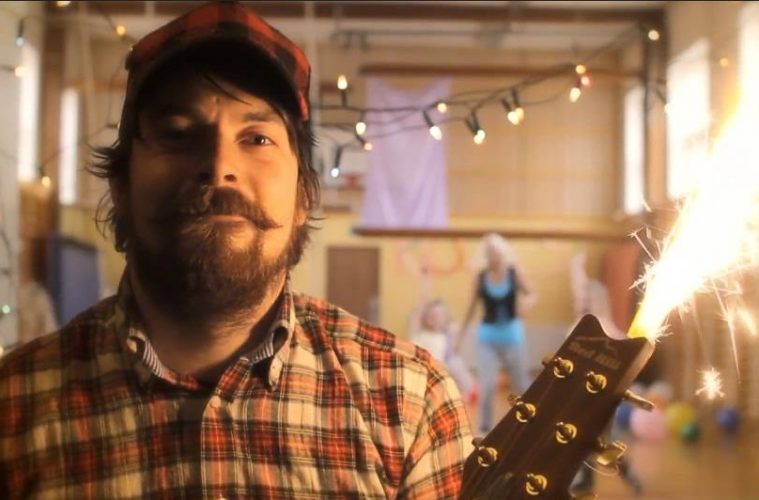 Snævar Albertsson is an extremely talented musician who is the mastermind behind ‚Dad Rocks!‚.

The debut album „Mount modern” is a folk/pop masterpiece that already deserves the ‘classic’ status. Listen to the album and see for themselves about it! We look forward to the next album which promises to be equally interesting.

Now you have the opportunity to know Snævar slightly better in an interview granted to us. So ladies and gentlemen… let’s start.

Marcin: Could you tell a little history of Dad Rocks!? How did it start? What is Dad Rocks! for you?

Dad Rocks!: Dad Rocks! became an idea in my head in 2009, when my daughter was born. I was 23 years old. I was playing in my other band, Mimas, but I needed an outlet for the inspirations and emotions that came with fatherhood, and those were very personal issues, and didn’t really fit anywhere with the band at the time. So I picked up an acoustic guitar and tried to translate my experiences into whatever music came out. To me, Dad Rocks! is a way to step back for a moment and observe the surroundings, in both a positive and critical objective.

Marcin: It’s been exactly two years since your debut „Mount modern” was been released. How does this album feel for you, in retrospect?

Dad Rocks!: I’m really happy with it actually. It feels like a good start. It has gained me a modest following, but a loyal one, which is all I can ask for.

Marcin: Tell me about the creation of “ Mount modern” – how did the writing and recording process go? Any surprises or challenges? What are your memories of the process?

Dad Rocks!: It was one of the most pleasant recordings I’ve been involved in. It was a really organic process, and with a lot of great friends involved too, playing and contributing. We didn’t know how the album was going to end up, so we simply went with the flow without too many expectations.

Marcin: The album was mixed by Addi 800 (Blur, Björk) and mastering was made by Tom Mcfall (REM, Stars, Regina Spektor, Bloc Party). How did the collaboration with them?

Dad Rocks!: Addi 800 was working in a studio next to my parents place, and he recorded some vocals for my other band Mimas. We had a really great connection, and we’ve worked together now on three different projects. He is such a great guy to work with, he has an amazing ear and is very patient. I got in touch with Tom Mcfall through a friend who manages him and a whole bunch of other people in the audio business.

Marcin: What would you change on this album if you had the opportunity to record it again?

Dad Rocks!: I’m not sure. I’m pretty happy with it as it is, but I’ve learned more about the production side of things, and I’d probably change the sound a bit. In terms if music and lyrics, I wouldn’t really change anything, as the album represents where I was at the time, and I’d rather not regret the past.

Marcin: Who made the cover of the album and how it connects with the music or lyrics?

Dad Rocks!: The cover was created by an amazing artists from Aarhus, DK. His name is Jon Gotlev, and his company is called No Heroes. He also plays drums in the danish band LISERSTILLE. There’s a connection between the mountains and the title obviously. The album lyrics look into antagonisms and challenges in modern life.

Dad Rocks!: It brackets everything else for a little while, and functions as a sanctuary for a couple of minutes, before everything turns to normal once again

Marcin: I think the lyrics are important aspect of your music. In what way the lyrics should have an influence on listeners?

Dad Rocks!: I’m not sure. I mostly write them for myself. There’s no real political agenda, but I try to describe everyday situations, and hopefully leave things up to the listener.

Marcin: Are your songs based on real-life situations or are they made up?

Dad Rocks!: There’s always something from real-life in them, but then I tend to improvise, exaggerate and build upon those stories.

Marcin: What inspired you to move into music, or was it always a part of your life in some way?

Dad Rocks!: I was crazy about music when I was a kid. I’d listen to Elvis Presley or Michael Jackson for a whole day until my parents went nuts. My uncle taught me a Metallica riff when I was 14, and I started playing guitar. I started by learning the first 5 Metallica records, and then my metal period was kind of over, and I started listening to 90’s grunge and indie. I started singing along to songs, which also tested the patience of my mother, but lucky for me she didn’t throw me out of the house. I’m still pretty bad, but I just do it anyways.

Marcin: How you recall your childhood? What are your earliest musical memories?

Dad Rocks!: I once got a membership card for this icelandic Elvis Presley club. I also received a t-shirt and a mixtape with Elvis songs. That was amazing to me. Besides listening to music and riding my BMX I did a lot of fishing and a bit of shoplifting.

Marcin: What are your favorite bands? What music are you listening to that you’d recommend?

Dad Rocks!: I’m spending some time writing exams these days, and Jim O’Rourke really works perfectly with that. I’m getting into a lot of the Doomtree projects, which is a hiphop collective. My friends send me quiet a lot of music from time to time, and I end up listening to that a lot, which is great. In terms of favorite bands, that’s a tough one. I’d have to say Bob Dylan, Tom Waits, The Low Anthem, Sam Amidon, Sin Fang, Leonard Cohen, Sparklehorse… Oh man, this might take forever!

Marcin: Which Icelandic artists are you listening to most in 2013?

Marcin: Outside of music what are some of your interests?

Marcin: What are your plans for the near future?

Dad Rocks!: We’ll be releasing our next album in the spring hopefully, and I’ll be doing some touring in December with my good friends Honig and Town of Saints. We’re setting up some more tours as well. So it’s quite exciting.

Marcin: Are you writing songs for a new album?

Dad Rocks!: After we concluded the work on the upcoming album a couple of months ago, I’ve written a handful of songs. We might follow up on the album with an EP in 2014 as well.

Marcin: Where do you look for the inspiration to creating new songs?

Dad Rocks!: I just try not to look too hard, but generally things that I have a hard time understanding, or ambiguous situations tend to find their place in my lyrics.

Marcin: What do you want to achieve on your new album, from a musical perspective?

Dad Rocks!: I want to add as much as possible, without overfilling.