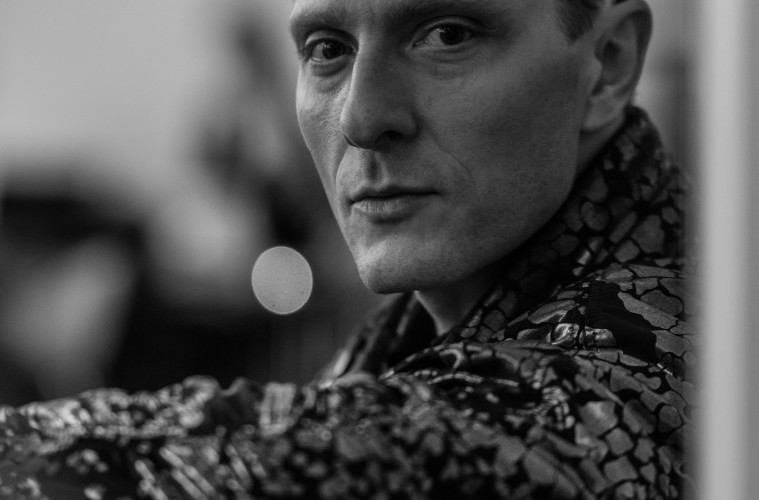 „We love to play for Polish people!” – Special interview with Daniel Águst from Gus Gus

We´ve met in one of the newly opened café´s in the center of Reykjavik, where Smutty Smiff exhibits currently his collection of original photographs of Andy Warhol, David Bowie, Debbie Harry, the Sex Pistols and many other legends of contemporary music. He ordered an espresso and sat next to me in a chair with characteristic for himself grace and effortless charm. Dressed in outstanding, gold and black vest, unconsciously concentrated stares of the customers and employees. It was clear that his presence arouses emotions. 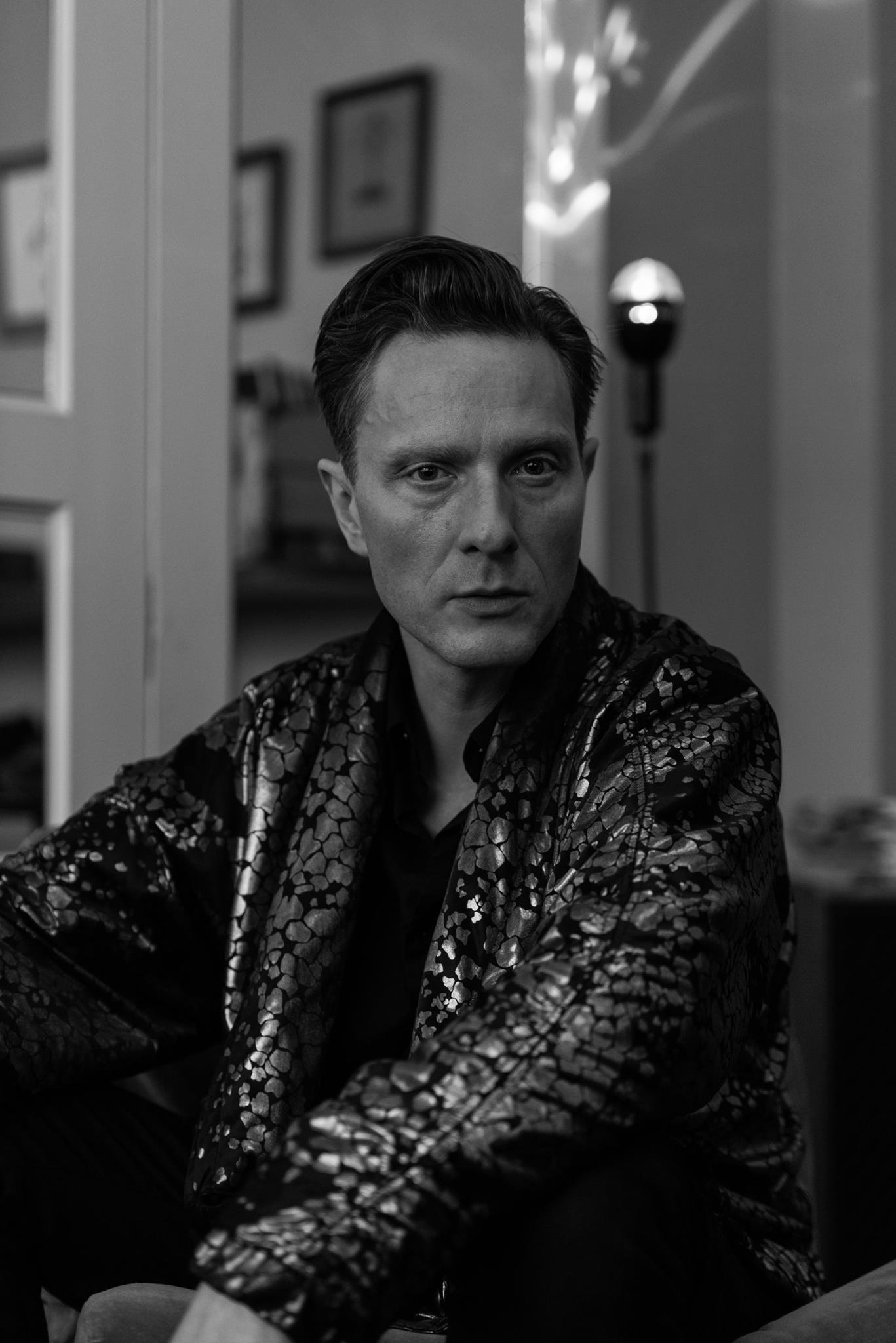 Daníel Águst, because it´s him I´m talking about, is one of the most recognizable and talented musicians in Iceland and abroad.

His career spans throughout nearly 30 years and only speeds up with time. Daniel, of course except for singing in Gus Gus, worked on many other, equally exciting projects. One of them, Esja, in cooperation with Krummi and Bjarni from the hardcore, legendary Icelandic band Minus; Halldór Björnsson and Frosti Gringo from Legend, and Smutty Smiff (former member of Levi and The Rockats/The Rockats and The Havalinas), is one of the best-rated projects in the history of Icelandic music. He also composed music for documentaries and television as well as for Iceland Dance Company. He also released two solo albums: „Swallowed a Star” (2005-2006) and „The Drift” (2011).

Personally I met Daniel, when I started working at Radio Iceland. I was organizing a charity concert back then, with the biggest acts of contemporary Icelandic music, for the earthquake-stricken orphanage in Nepal. Then it occurred to me, that a person who hides behind the glory of a frontman in Gus Gus really is very humble, kind and sensitive man, who deserves the recognition and appreciation like no other. That is why I decided to bring forward to you this multi-colored person.

Wiktoria Joanna: OK, Daniel. I would like to ask you about your career. You’re in show business for over 20 … almost 30 years, right?

WJ: So how did it all start for you?

D: I was 14 years old when I performed for the first time in the biggest concert hall in Reykjavik, where I sang at the youth festival. It was more or less at the same time, when the Prince´s song „Purple Rain” came out. And it was the very first song I sang in front of an audience. Before that, I sang only for the family and in the shower (laughs).

WJ: Yes, as it usually starts…

D: Yes. But my first real step in the musical career was when I joined a college rock band, which we called NYDÖNSK. It was a band of classic rock characteristics. We have released 5 or 6 golden albums before I started a new adventure with Gus Gus in the electronic arrangement (laughs).

WJ: What is happening now with Nydönsk? Are we witnessing a come-back? You´ve released an album last year?

D: Not exactly a come-back, but we have released new material last year and got great reviews, which is not that bad for a band which is, you know, 27 years old (laughs). The album is called „Disco Berlin” and is inspired by the city of Berlin. Made by a group of old guys (laughs), who were having a lot of fun.

WJ: Sounds great! And how was it with Gus Gus?

D: Actually I was asked to act in a short film by one of the directors who was a good friend of mine, Siggi Kinski. The shooting of the film was postponed, so I decided I wanted to embark on a musical venture with him. So we started to make music …As it happened, every actor, every person affiliated with the short film [Nautn, Arni and Kinski; ed. Ed.], had a musical background, or some musical roots and some talent (laughs). And because I was very interested in electronica and its production, I decided we should go for the electronic sound. Stefán Árni, the other half of the film director’s team had an old friend called Biggi Veira, from high school, who was making cool electronic music. He took me for a visit to him and we immediately liked what we heard, he was doing really cool stuff with his fellow musician Maggi Lego. Actually, it was the material, which we later released under the name “Gus Gus vs. T-World” … T-World was the name of their band. And it was really excellent music material which we released it in-between GusGus albums.

WJ: You performed also at the Eurovision Song Contest. Can you tell me something about this? How did this happen? How did you enjoy it? Do you like it at all?

D: I’m not very keen on this type of competitions …

WJ: I thought so, that´s why I wanted to ask.

D: But what was attractive for me, it was the possibility of my collaboration with a musician, who was highly respected. It was him, who actually wrote the song. And it was through this collaboration, actually by an accident, I won the qualifications for the Eurovision Song Contest in the country and … yes … I really did not want to go to Switzerland and sing there, but it was a great experience. Singing in front of five hundred million people and live broadcast was a very valuable experience.

WJ: How did you feel about it?

D: …Overwhelmed, I felt a little overwhelmed. I did not want to sing this type of music in front of hundreds of millions of people. BUT, we had fun all the time. So the entire experience was great fun.

WJ: Later, you´ve started Esja. How did that came to be?

D: It was 2006. I had moved back home from Belgium, where I lived in Brussels for some time. I just had released a solo album which took me a long time to put out and I was thirsty to explore other angles of music. … I was renting a studio place in the basement of an office building on Klapparstigur [Reykjavik city centre; ed. Ed.] and there was this vintage, second hand clothing store across the street, and there Krummi was working as a salesman. And I invited him to come and check out my studio. Actually, when he came for the first time, he picked up the guitar and started playing a cool riff he’d been working on, and I started to sing. The words just came by themselves, automatically. It was magic. So we made an immediate connection, which we enjoyed for several years and released and resulted in a self-titled album. We are very proud of this project from the sidetracks (laughs). We played several times live and we loved it, but we had to go back to focusing on our main projects, GusGus, Nýdönsk, Mínus and Legend. But certainly we will go back to Esja, because it’s natural to us.

WJ: I saw you live, I listened to your album and I think it is a great idea. You are terrific!

WJ: Because I am doing this interview for Polish fans, I have to ask about your relation to the country of my origin. Gus Gus was already quite popular in certain circles some decade ago in Poland, everyone knew „Ladyshave” and other flagship hits from your repertoire, but I´ve noticed that you play more often in Poland these days, am I right? How do you like Poland?

D: I love Poland! We love to play for the Poles.

WJ: Does our audience differentiate from others?

D: In general, I think the Polish public is more enthusiastic in relation to music. I believe that Poland is one of the strongest destinations in the world, along with Mexico and Germany. But playing for people in Poland is simply … with them, you can always create this … Eternal Moment. This is the reason why people want to come to the concerts because they want to experience it and live it. And it is happening in Poland every time! In other places in the world – sometimes. In Poland, every time.

WJ: I agree with that statement. I wanted to ask more about Högni. How did it happen that he joined Gus Gus? Was it planned, or maybe by an accident?

D: (laughs) It was a very happy accident. Högni met with President Bongo and became very good friends. Of course Högni was then in Hjaltalín. So he invited him to the studio and …

D: Exactly. He recorded some vocals and the rest is history. He is already part of the team ..

WJ: Fantastic. When will you next visit Poland?

WJ: (laughs) Certainly! But you have already something planned in the schedule?

D: Yes, 6th of August at the Off Festival in Katowice.

WJ: Thank you very much for the conversation!