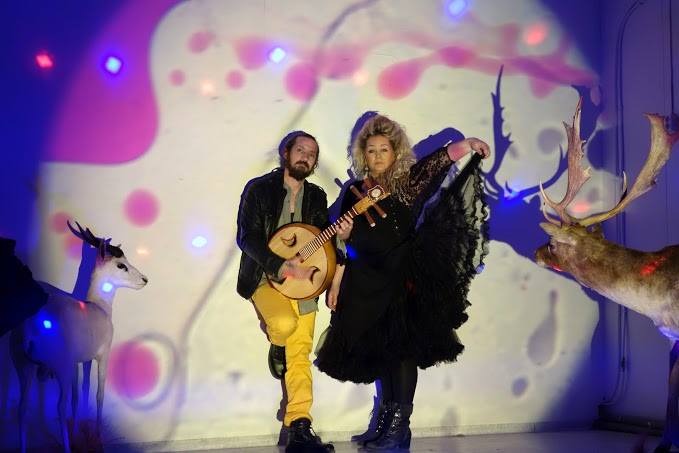 Karma – living life and seeking freedom within – an interview with Bellstop

Recently we have introduced our review of the debut album „>Karma”

Now we can give you wider insight into the new album directly from the band members. Elin and Runar are here to tell you about themselves and „Karma„.

See what they have to say in interview below.

Marcin: Could you give me the history of Bellstop, in short? When did you get together? How did you get know each other and what have you done so far?

Bellstop: We started playing together in a band called Heima in early 2006 when we lived in China. We had both been in bands before but not together. We released an album in China called „The Long Road Home”, we played many concerts there especially in our home town at the time called Xiamen. We have known each other since we were 16 years old and we have been together as a couple for a long time.

Marcin: I’m very interested in what you said about yourself: „a life full of adventure and risk from traveling around China and Asia for years with the mutual goal: living life and seeking freedom within”. It sounds amazing. Please, tell me something more about it.

Bellstop: Yes, we like to take risk and move around to exiting and new places, get to know different culture in different countries and learn more about life and understand it. Because with understanding there comes knowledge and knowledge is freedom.

Marcin: When did you come back to Iceland and why?

Bellstop: We did not want to loose the roots and also we were exited to see and experience the competition, there is a lot of good music in Iceland and it is challenging to be around great musicians when you are a musician yourself.

Marcin: How did you get started in music? It is something you’ve been doing for a very long time.

Bellstop: We both started in many bands when we were just teenagers. Elin has been singing since she remembers… so its been in both of us forever…

Marcin: “Bellstop” is your new name. What did happen to Heima – the previous name of your band? Why did you change the name and what does Bellstop mean to you?

Bellstop: Bellstop means „Stop the bells”. Usually bells are intolerable bells wake you up in the morning. Bells go of when something is wrong and we even say that bells go of in our heads when we sense something is not right.. So JUST STOP THEM 🙂 Heima has been with us for a long time and when people ask us why we changed the name of the band we say: „Because we can”.

Bellstop: Yes, our slogan is Folk&Roll because our music is just that mix of folk and rock and roll.

Marcin: I’d like to hear about the writing process for your debut album “Karma”.

Bellstop: Uff haha the writing process for Karma took 3 years. We write and fight at the same time we are quite intense when it comes to writing music and we do not always agree and then in the end it usually comes together.. But Karma is a very honest album ,all of the emotions on it are true and it is quite sensitive.

Marcin: You said „Karma” tells the story of your life of the past 3 years. What has been the most exciting moment for you over the past years?

Bellstop: We have moved from China to Iceland again in that time. Lost friends and gained new ones and just all kinds of crazy stuff..

Marcin: Tell me about the album recording process – where did it take place and did you have any particular challenges to overcome?

Marcin: How does the sound on this album differ from your previous music?

Bellstop: It has just evolved in a good way, we think the songs are faster and the sound is more open. We also found this old machine in a fleemarket in Reykjavík it is an Tandberg recording device from the year 1951 and we used it as a guitar amp on the album we think it is quite cool and a bit vintage..

Marcin: Some have pointed out how your music reminds them of Icelandic band Of Monsters and Men. What would you say to them?

Bellstop: Well we have been playing together for 7 years and first time I heard Of Monsters after we came to Iceland so I don’t really know the similarity because we were not in the same environment but our music and their music comes from a very honest place and is folk related.. maybe that is what people pick upon, but I would say our music is much darker than OMAM.

Marcin: What movie or book do you think is the best analog for your music?

Marcin: Tell me about creating a video for the song “Trouble” – how did the making of this video look like?

Bellstop: It was great. All the actors in the video are our friends and family so they all helped out and together we created this great energy and it just worked out very well and the director our friend Sigurgeir Thordarsson did a great great job.

Marcin: What are your current plans?

Bellstop: We are gonna play and tour as much as possible for the next year to introduce our new album and write a lot of new songs and then record another album next fall.

Marcin: What do you listen to for inspiration?

Bellstop: We like Jack White and Will Oldham also Mark Lanegan but we also liked the grunge music scene when we were teenagers so Pearl Jam, Soundgarden and those bands we grew up with.

Marcin: Which Icelandic artists do you listen to most in 2013?

Bellstop: We like a band called Mugsefjun and Emiliana Torrini is also a great artist and then there is Mugison, and there is also a choir called Fjallabræður they are a force of nature, really, like 100 guys singing together, many of them are really hard workers and you can just hear a bit of their soul every time you listen to them. Then there are just so many other artists that we listen to from time to time.

Posted pictures are from Bellstop