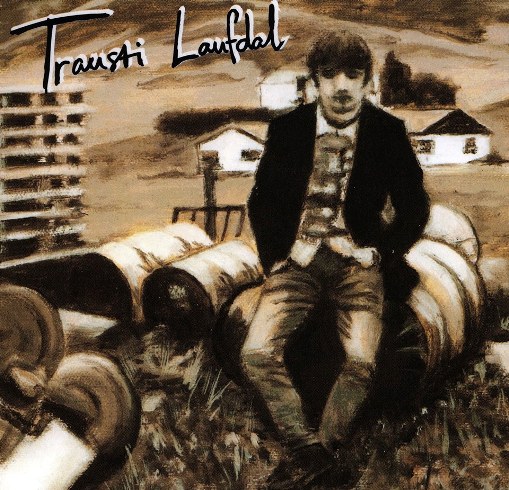 Music is my heart and soul – interview with Trausti Laufdal

Trausti Laufdal is a member from the famous progressive rock quartet Lokbrá.

He released his debut solo album „Trausti Laufdal” in 2013. Progressive blues sound with elements of folk and rock music of the 70’s. Our review of this album is here.

Let’s see what Trausti says about the music, his debut album and musical plans.

Marcin: When did you start playing music?

Trausti Laufdal: I´ve been playing music since I can remember. I got my first guitar 14 years old and played my first gig some months later and I´ve been at it ever since.

Marcin: I know that for many years you’ve played in several bands such as Moðhaus, Pontiak Pilatus and Lokbrá. Tell us more about these bands and your artistic development.

Trausti Laufdal: Moðhaus was my first real band , teenage rock band but I got good experience writing song and lyrics and we played a lot of gigs all over the place. Lokbrá was and still is my favorite band and the best friends I´ve ever head. Lokbrá is a progressive rock band , influenced by artists like The Beatles , Led Zeppelin , David Bowie , The Mars Volta , Radiohead and Icelandic supergroups like Sigur Rós and Trúbrot. We released our first album Army Of Soundwaves 2005 , produced by Birgir Örn Steinarsson. It was released in Iceland at the MSK label , and later released in the U.S by Lucid Records. I formed Pontiak Pilatus 2008 with a couple of good friends just for fun. Didn´t last long but that was really the start of my solo career , some of the songs I wrote for that band landed on my solo album.

Marcin: What is the reason that you’ve decided to release a solo album? Why now and not before?

Trausti Laufdal: I´ve really never got the chance or never thought of doing a solo album before I started working on this one 2010. I have always been a part of a band , and I always wanted to put 100 percent into that project I was doing at the time so it didn´t occur to me. But when Lokbrá retired there was this huge hole in my existence I thought a solo career could fill. I´m glad I didn´t do it before because I probably would have released a lot of crap.

Marcin: You want to focus on solo career now? Or maybe still continue to play in a bands?

Trausti Laufdal: That is a great question , since I finished mixing the album last year I have been asking my self that same question. For example I recently formed a new band with my friend Oddur Ingi called El Guapo. That´s a really exiting project that I hope I will have time to work on. I have also been working the last year on a hip hop project with my friend Hafsteinn Þór. I´ve written and recorded songs with Hafsteinn and also made some instrumental tracks I don´t know what will happen to. I´m at the moment looking for hip hop artists around the world to work it. I´ve also been working with Synthadelia Records , witch is a new Icelandic online Record Company , I hope to release my solo and side projects there from now on. We Lokbrá boys still have our second album on our shoulders , and hopefully we can release it in 2014 and play some gigs. On top of that I´ve already written the songs for my second solo album , I´m currently working on the lyrics and production. So to answer your question I really just go where the wind takes me , my solo career has taken off and my goal is to release one album a year from now on. I also have ambition to work with other musicians and band as a producer and a sound engineer.

Marcin: When did you write the songs for solo album?

Trausti Laufdal: I wrote like 60-70 songs between 2006-2009 , made demos of most of them and picked out what I thought were the strongest ones and took them to the studio.

Trausti Laufdal: Making a solo album is a lonely mission. So what I did is get as many of my friends to participate a long the way. The difference is huge , working on this album I had to step in all the roles , sound engineer , producer , publisher. I learned a lot because I made all the mistakes in the book along the way , and probably found some new mistakes to make but that won´t happen again.

Marcin: How does it feel to release a solo album after so many years of making music?

Trausti Laufdal: It feels real good, it´s a huge step for me as a musician and a sound engineer to finish as big a project as this was. What surprised my about was how difficult it is to make an album from A-Z almost by myself , if it wasn´t for my co-producer Sveinn Helgi I probably would still be working on it. Next album will be much easier project and I will hopefully release it summer of 2014.

Marcin: You recorded the album with a little help from your friends. Introduce them briefly and tell how you know them.

Trausti Laufdal: Sveinn Helgi Halldórsson recorded and produced the album with me from day one. I wouldn´t have been able to make the album sound like it sounds if it wasn’t for him. He also played bass on few tracks, he´s a bass player in the bands Æla and Jan Mayen. My girlfriend Hildur Þórlindsdóttir sings with me on the album , she really made the album more dimensional for me and proved she´s a talented musician. Þorvaldur Kári Ingveldarson plays the drums , great drummer and musician. He is a member of the band Noise like my good old friend Stefán Vilberg who played the bass on some tracks. Þorleifur Gaukur played the harmonica on the album , he´s a pure genius and a dear friend. He´s a lot responsible for the bluesy elements on the album. Svanur Herbertsson plays the piano on the album , he´s a member of the bands Swive and Herbertsson. I got Sigurður Guðmundsson to play the Hammond organ , he´s probably the most talented musician I´ve ever worked with and I was honored to have him on the album. Sigurður is most known for his work with the Icelandic reggae band Hjálmar. Valdi and Eiríkur from the great Icelandic band Valdimar played the brass on the album.

Marcin: It was difficult to invite them to cooperate with your solo album?

Trausti Laufdal: Not at all , it was really too easy to get these great people to work with my , I guess I´m blessed.

Marcin: Where did recording take place and how was the recording process for this album?

Trausti Laufdal: Most of the sound work and recording took place in Studio F.I.T.L.

Marcin: Who wrote the lyrics to the songs?

Trausti Laufdal: I wrote the lyrics except for “stórt er spurt” , that is a poem by Davíð Stefánsson , on of my favorite Icelandic poets.

Marcin: The lyrics are in icelandic. Please tell about the subjects of the lyrics.

Trausti Laufdal: I´m singing about stuff that bothers me , that I care about , memories from childhood , love , you name it. These lyrics are a lot more personal than my previous work.

Marcin: How important are lyrics for you?

Trausti Laufdal: The lyrics I think is the most important thing to me. Bad lyrics can ruin a good song and vice versa. Good lyrics don’t always have to be „Bob Dylan” good , but I think it is important it fits the music. For example if I was making a straight up rock n roll album I wouldn’t be writing about as personal thing as I do. In Lokbrá my lyrics were sometimes about nothing , but it worked. I don´t think that will work on my solo stuff.

Marcin: Who handled the artwork?

Trausti Laufdal: My friend Sigurður Ástgeirsson took the photos, I handwrote the text , Ingvar Þorvaldsson painted the oil painting on the cover. Finally I got Einar Skúlason and Victoria from Abbey Road Design Iceland to glue it all together.

Marcin: What is the music for you?

Trausti Laufdal: Music is my heart and soul. Music has given me so much all my life I had no choice but to be a musician and hopefully get the chance to give some of the love back.

Marcin: What is the most important effect music has for you?

Trausti Laufdal: Like Marley said “One thing about music is when it hits you feel no pain”. Music makes me feel real good , sometimes it´s my best friend. Music has helped me through a lot of the worst times in my life , so I know from personal experience that music has real healing power.

Marcin: If you could do a cover of any song from any band, which one would it be and why?

Trausti Laufdal: I would cover Taylor Swift’s We Are Never Ever Getting Back Together. I really love covering songs although I haven´t released much of it.

Marcin: What music are you listening to that you’d recommend?

Trausti Laufdal: Lately I´ve been listening a lot to Bill Withers. I would strongly recommend a documentary about him called Still Bill. I´ve also been listening to Georgio Moroder a lot. These past weeks I´ve been listening to Tony Joe White , O.V. Wright , Blondie , Tame Impala and There is a lot of great Icelandic music I would recommend like Ojba Rasta , Múm , Snorri Helgason , Jan Mayen , Oddur Ingi , Kimono , Jói það er síminn til þín , Skúli Mennski , Gímaldin and probably my favourite band in Iceland right now Æla (translated puke).

Marcin: I would be interested to know, how you see icelandic music scene?

Trausti Laufdal: It’s pretty amazing how many great musicians are in Iceland. I´m personally surrounded by musicians and probably 10-15 of them I would call actual musical geniuses. I think that is a pretty good ratio for such a small country. But being a musician in Iceland far from being profitable and sometimes it feels we are second class citizens because the government doesn´t do shit for us. Like some stupid Icelandic politician said recently “Musicians should get real jobs”. Harsh words coming from a politician. I´ve had some “real” jobs in my life and they were all pretty easy compared to being a musician , and I got paid for them. But I choose to be a musician. But there is a bright side , and that we have to thank the internet and off course musicians like Björk , Sigur Rós and Múm. That is that Icelandic music is getting more and more attention from foreign listeners and Recording companies. So more and more Icelandic musicians are finally getting recognized and getting paid for their work. But the downside to that progress is that more and more Icelandic musicians are singing in English , therefore we are loosing the Icelandic language from the music.

Marcin: Outside of music what are some of your interests?

Trausti Laufdal: I love to play video games, especially online Black Ops with my friends. I also love animals , I have a pet guinea pig called Yoko. If I wasn’t a musician I would want to work with animals. I´ve had a lot of pets in my life, for example two turtles named Simon and Garfunkel , iguana lizard called Jimbo (named after Jim Morrison the lizard king). I love animals and if I didn´t have music in my life I would be working with animals.